Start a Wiki
Does anyone know about the SpongeBob episode "The Sponge Who Could Fly," that aired in March 2003? It was dubbed "The Lost Episode" by its commercials based on the episode's storyline, where Patchy the Pirate uses a treasure map to find the Spongebob episode that he lost. The night before the episode was aired, I was sick with the norovirus. I was vomiting almost every 5 minutes and I was feeling too ill to fall asleep, so I stayed up and watched TV.

Around 2:30 AM, my stomach started to settle, so I planned to turn off the TV and try to fall asleep, but as I was reaching for my remote control, the opening for the Spongebob TV show started playing. Spongebob was my favorite show at that time, so I couldn't miss out on watching it. Although, I thought it was kind of strange that they were showing Spongebob in the middle of the night, but I didn't think much of it. When the opening played, I noticed that the contrast of the animation was slightly darker than usual, and the theme song sounded a bit harsh and raspy. This made me feel a little uncomfortable, but I also tried brushing that off. The title card read, "Lost Episode," so I figured that there was a mishap and Nickelodeon was accidentally airing "The Sponge Who Could Fly." 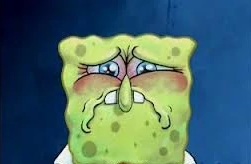 When the episode started playing, it immediately looked out-of-the-ordinary. It started off with Spongebob sitting on his bed, slouched and looking downward with a somber look on his face. This was definitely not like himself. Spongebob is so optimistic all the time; why would he be acting like this? After about 10 seconds of seeing Spongebob like this, he let out a big sigh, then looked over to his bedside barrel, and the screen zoomed in on a pill bottle that was sitting beside his clock. Once the screen zoomed in close enough to read the text on the bottle, it showed that it was a Prozac bottle. The show then panned to a scene with a much brighter contrast, showing Spongebob taking one of the pills, then running off smiling and laughing. The fact that Spongebob had to take pills to be, well, himself, made me feel uneasy, especially because mental disorders and antidepressants are more mature themes that obviously shouldn't find a place in any kid's cartoon. It should be noted that this was seen on a show intended for kids. The screen then flipped back to the original scene of Spongebob looking distressed, while at the same time changing the contrasts back to the darker one. The screen froze on Spongebob for a few seconds, then flickered to a new scene.

This scene showed Spongebob at his desk (the same one that he was in the episode “Procrastination" with his Prozac bottle, a piece of paper, and a pencil). In this scene, instead of staying at one contrast, the colors kept on flickering from light to dark. Spongebob gripped the pencil in his hand, and a tear rolled down his face. The part that bothered me the most was that the tear didn’t look like the usual blue, cartoon-style tears the characters in Spongebob usually cry out. This tear looked completely realistic, as if there had been a drop of water rolling down my TV from his eye. Spongebob wiped the tear from his face with his sleeve, and began to write on the paper, reading out loud.

“I can’t take it anymore,” he said. As soon as he got that sentence out, a faint noise started playing in the background. It sounded like a child crying. This noise continued playing as Spongebob continued writing.

My life has been horrible and hasn’t gotten better. My best friend, Patrick, is only my best friend because he doesn’t know any better. My neighbor, Squidward, hates my guts. He would probably be happy if I wasn’t around anymore.

Spongebob stopped writing and talking and started weeping loudly. The color-flicking started getting faster, and the cries in the background started getting louder, and it sounded like more children were beginning to cry. It could’ve just been my imagination, but I remember hearing one of the children very faintly yell, “He’s gonna do it!” The children’s cries get louder and the colors keep flickering faster as Spongebob keeps writing.

The only job I can get is being the fry cook at the Krusty Krab. My boss, Mr. Krabs, refuses to give me an actual paycheck, and he basically uses me to get more customers. I’m in my 20’s and I still don’t have my driver’s license. Sandy is the only girl I’ve ever had in my life, and even she’s ‘just a friend.’ She’s never had any interest in me. I’m pretty sure she’s only my friend because she feels sorry for me. I’m sorry if I’m hurting anyone at all for doing this, but I just can’t live like this anymore.

The screen froze for a few seconds, then the show continued with Spongebob writing his final sentence. The contrast stayed dark instead of flickering from light to dark, and the children stopped crying. It was absolute silence except for Spongebob saying, “Goodbye…”

The cries came back. Spongebob quickly stood up, twisted off the lid on the Prozac bottle, dipped his head back, let all of the pills in the bottle fill into his mouth, and swallowed them all whole. The screen twitched and the animation was darker, but still visible. Spongebob clutched his stomach, and vomited realistic, pale greenish-orange stomach bile. It was clear that his body was trying to cleanse itself from the overdose, but it was no use. Spongebob collapsed onto the floor, and lied there motionless until the screen turned to static.

Needless to say, I was scared out of my mind, and sleep was out of the question. Recently, I’ve been looking for this episode all over the internet, but not even one website seems to have it. If you recognize this episode, please let me know.

Retrieved from "https://geosheas-lost-episodes.fandom.com/wiki/Spongebob%27s_Suicide?oldid=184727"
Community content is available under CC-BY-SA unless otherwise noted.