Start a Wiki
The popular children's television series Thomas the Tank Engine and Friends was receiving very good reviews when the third season aired in 1991. There were 26 episodes total. Thomas and Percy's Christmas Adventure was the final episode of the season but there was a 27th episode that was written between Diesel Does it Again and Henry's Forest. The episode was titled James' Bad Day.

The episode opens up with James The Red Engine pulling a goods train through an orchard. The opening sequence was the exact same as the episode "No Joke for James." There were a couple of slight differences however. The colors seemed a bit more dull and James was going a bit slower than usual. The audio is a bit distorted and the narration can barely be made out. Michael Angelis and George Carlin, the British and American narrators respectively are talking in a very slow monotone voice that its very hard to hear their voices. The next shot however is perfect but James is now pulling an express out of the station looking extremely sad as if he had witnessed something horrific. There is no more narration at this point and there is no sound. The scene then fades to black and then this is where the episode got strange.

The next shot is at the sheds and James looks extremely agitated. Gordon and Henry are also present. They begin laughing at James but in a dark demonic tone that didn't sound anything like Michael Angelis or George Carlin. Gordon tells James that he wonders who would be next to be sent to the scrap yards. Henry then tells Gordon that James should be next for being silly. At this point, the two narrators sound as if their voices are clogged. Gordon and Henry have acted pompous and arrogant before and sometimes insult their friends on the show but this was something that was much more cruel and very dark for Gordon and Henry to say. The next shot is of James and his eyes move but then lock onto the screen.

He just stares at the viewer for about 30 seconds and fades to a still image for about one frame. From what I could make out, it looked like Thomas and Percy being thrown into a volcano. It looked absolutely horrific! It was for about 2 seconds and we then see James going down an old abandoned line. James then begins to cry and his shiny red paintwork begins to smear and turn dark crimson. This is where the episode comes up with two extremely different versions from the US and UK versions

James then comes across two small tank engines that look identical to Thomas and Percy. The small engines in fact were them but they were completely dented, their funnels were cracked and they didn't even have their faces. They look as if they were singed. James begins to cry at first but a faint whisper is heard and James goes from crying to just being still. James' eyes rolled over to me and he smiled. Then he says "This will be your fate!" Then he takes of down the line and begins laughing loud and demonic.

A shot from the episode "James Goes Buzz Buzz" is seen when James's nose is red and his eyes spin but the scene plays backwards and repeats itself several times. James then passes by Gordon who is simply laughing at what he thought was James' misfortune and speeds along with the express laughing extremely demonic and tells James that there never was or will be any use for him or the two small tank engines. James then goes from laughing to grunting and growling. James then screams and the sound was so piercing that I tried to turn down the volume on my remote but it sounded as if James was in the room. James got cross and what appeared on his tender was a machine gun and he shot and blew up Gordon who tried to dodge the bullets and a loud explosion is heard. Obviously feeling a bit guilty, James races down the line and goes down a narrow mountain track where he flies down the mountain side and eventually reaches the bottom. James instantly breaks in half and is completely mangled.

The last scene shows a horrific shot of Thomas, James and Percy completely disfigured. They don't even have their faces. Thomas' tanks appear to have been bashed and his dome is missing. There is also a big crack in his smoke box. Percy's wheels aren't even attached to him and his cylinder is missing along with his connecting rods that are cracked and he's also missing his funnel and buffers; and James was the worst out of all three. It didn't even look like him. then the scene cut to a shot of duck and percy but duck had hollow eyes and jagged teeth

James' red coat of paint was all rusted and his boiler was cracked in half. His tender had been broken apart and he is also missing his front bogie wheel. His six driving wheels are just hanging from his running plate. Thomas and Percy also have blood stains all over their paint work. The scene pans out to show Gordon(who somewhat survived the blast) and Henry laughing with Devious Diesel. Edward, Duck and Toby are present and Diesel rolls along side the three other engines saying "you're next!" In a very demonic tone. The last shot is of Edward, Toby and Duck looking horrified as if they know what is about to happen. The episode fades to black for about one frame and then the normal end credits roll.

Like the United Kingdom's version, James goes along an old abandoned track. However he ends up at a cemetery where he sees engine parts scattered all over the graves. James hears the sound of demonic laughter coming from the sidings which sounds like Diesel 10 from the magic railroad movie. He then hears Gordon and Henry say "you're next" as he races off into the distance. James decides to hide into a siding and puffs up in front of a gravestone. James begins crying softly but it sounded like an actual person crying as if the narrator(George Carlin) was crying with pain rather than acting. The next shot is of James' face. His eyes aren't even moving and he's just staring at the grave stone. The scene then zooms into the grave stone. There is no name written on it but it simply gives a time of death that says May 12th 1937- June 22nd 2008.

This was actually the birth and death date of George Carlin the American narrator. James then backs away from the stone and goes off to hide in the sheds. The next scene is of James spinning on the turntable and Gordon is watching him and laughing at him. James backs down into his shed and tears begin rolling down his eyes. James' eyes are just staring into the camera as if he is staring right into the viewer.

This happened to be a shot from the first season episode Tenders and Turntables. The scene fades to black and then a shot of Tidmouth sheds, abandoned is used with the engines all rotting away. James is on the turntable still looking depressed and begins crying. The engines that appear to be scrap engines are Thomas, Percy, Edward, Toby and Duck. The scene pans out to show Gordon and Henry laughing with Diesel. Gordon then speaks and calls James a small red engine in a very demonic voice and the episode ends with normal credits. After the credits, an image flashed on screen for a frame. The image shows the Toby model's face mask on a pile of wood, Duck’s model face floating in a pond, and Edward’s model face inside the season 2 scrap yard behind a rusty Trevor model.

After watching the episode I decided to play back some of the shots that to me happened to have the strange differences in the characters' personalities. In the UK version James seemed to be acting very aggressive and acted as if he wanted everyone dead. It felt like he was actually talking to the viewer rather than being the regular prissy proud red engine he always tries to be. In the US version, James was acting very depressed and I felt very uneasy on watching this version seeing as how George Carlin was still alive by the time of the recording who would then pass away 18 years later. I couldn't find any images surfacing the web but I made up the single image of what would have been in the lost episode.

As I went to sleep that night I had a nightmare that I was in the episode. I was running around my neighborhood and James was able to ride off the rails and chase me. He kept yelling at me screaming "you're not getting away from me! I'm gonna rip out your organs and feed them to the troublesome trucks!" I must say, ever since then, I'll never be able to look at James the Red engine the same way ever again. Even when I'm walking through a store that sells Thomas merchandising (i.e. wal-mart, target) I feeling all the James toys are all out to get me! One night I had another dream that my HO scale James model came to life and tried to kill me. But it's only a small model so that meant I was able to destroy it. But as I woke up, I heard a tapping on my window and I heard a train whistle that sounded just like James' whistle on the show. I looked out my bedroom window and there was James. He had his angry face and his eyes moved up and down and he rolled right up to my window and stared straight into my soul. So I ran upstairs thinking I found salvation until an army of James models (Hornby, Bachmann, Trackmaster, Take n' play, etc.) had freight cars of anthrax and the real James said "The next person who reads the article will find me in their room tonight!" 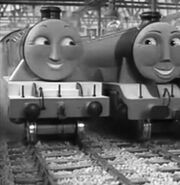 Add a photo to this gallery
Retrieved from "https://geosheas-lost-episodes.fandom.com/wiki/James%27_Bad_Day?oldid=175407"
Community content is available under CC-BY-SA unless otherwise noted.